I was back in Bowland yesterday with a group of farmers from the Peak District, led by my old Farming and Wildlife Advisory Group (FWAG) boss Chloe. It was lovely to catch up with Chloe, and what a great bunch of farmers they all were.
The idea of the day was to have a look at part of my client's farm, and in particular the work we are doing on the Curlew project, but the bulk of the day was spent on my friend Malcolm's upland farm, looking at how he manages the heather moorland, with summer and winter grazing with his cattle. We then had a look at one of Malcolm's species rich pastures, and spent time looking at how he stores and manages the muck from his cattle, for the best environmental outcomes.
It wasn't really a day of good birds, more a day of good company, glorious weather, and a glorious landscape as the back-drop to match the weather.
I sat waiting down by the river for the party from Derbyshire to arrive, with the calls of Nuthatch and Grey Wagtail, coming from the river itself, and the line of Alders along the banks. The party arrived, and we loaded them up in the tractor and trailer, and headed to the hills. 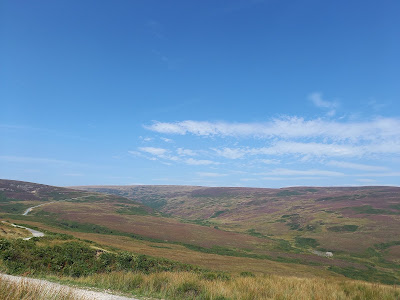 Our 'office' for the day (above & below) 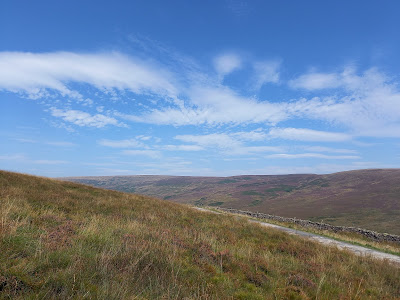 Our first stop was to have a look at an area that was formerly dense Purple moor-grass Molinia caerulea. The spread of Molinia concerns both farmers and conservationists alike, as it is relatively unpalatable to stock, and it can produce monotonous species-poor landscapes, which suppress other moorland species such as Heather. The spread of Molinia is thought to be caused as a result of overgrazing and excessive burning.
The cattle have been grazing these Molinia dominated areas, over summer, for a number of years now, and have started to produce results. The dominance of the Molinia has been reduced, and a more varied sward has developed, with the result that the amount of dwarf shrubs present, such as Heather and Bilberry, has increased. Result!
Further up the fell, we looked at areas where the cattle have been out-wintered on the heather until January, and they have been encouraged to remain in certain areas by supplementary feeding. This has resulted in the cattle 'trashing' the older stands of heather, allowing new growth, and creating a varied age structure within the heather. A varied age structure within the heather has huge ecological benefits, from invertebrates, to Red Grouse and Hen Harriers. And this is achieved without the need to burn. Result!
There was a steady passage of Swallows south over the fell, with a few Meadow Pipits and Siskins thrown in, and we were treated to views of Kestrels and Buzzards out hunting over the moors.
Returning to lower ground, we had a look at a species-rich pasture, that although past its best, was still full of Sneezewort and Devil's-bit scabious for example. Amongst this grassland Chloe found a female Four-spotted Orbweb spider, which was a first for me, even though it is fairly common and widespread. 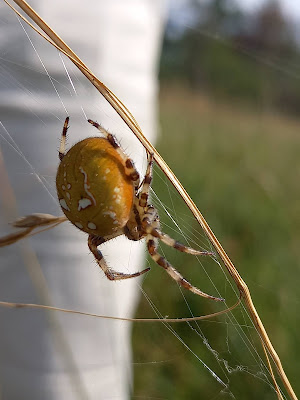 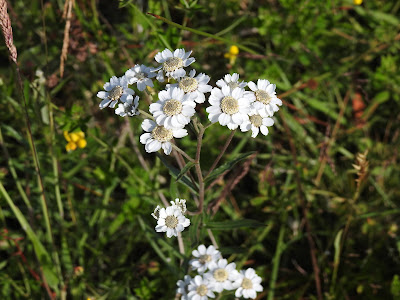 It is noted for being our heaviest spider, and it has some amazing prey catching abilities, with wasps and bumblebees making up part of its diet! What a beast!
So, a fantastic day spent with friends old and new, in a glorious landscape, with weather that couldn't be bettered!