Sorry folks. Today is Barn Owls again, just like last Friday.
Friend Steve made contact to say that his Barn Owls were probably ready to ring. I readied large bird bags and a set of “G” rings and arranged to meet Bryan over at Steve’s place.
Steve’s home is not a farm but is close to farmland where Barn Owls hunt. The average countryside dweller does not have to be a farmer to play host to a Farmer’s Friend, the Barn Owl. If someone either owns or has access to a building that Barn Owls might use, the paragraph below has useful information.
From the Barn Owl Trust - Barn Owl Trust.   “If there’s a large building that a Barn Owl can enter at 3+ metres above the ground then this is almost certainly the best place to put a new Barn Owl nest box. An owl box in a building is easier to erect, costs less, or is quicker and cheaper to make. Such locations mean a box lasts much longer and affords extra shelter.”
“Mounting an owl box on the outside of a building has many disadvantages and is not recommended unless there is no alternative. Buildings that are in human or agricultural use can be very suitable; Barn Owls can get used to almost any kind of activity as long as they can stay out of sight.”
Unfortunately Steve’s owls had of late soiled the lens of the “in the box camera” during their daily routines. By Friday morning all we had to go on were unclear images from early July which showed small owlets.
Let’s elucidate by explaining that owl homes don’t have plumbing or waste disposal systems and Barn Owls do not have a weekly tidy up of the home. Their messy nest places also contain remnant, long forgotten body parts of voles, rats and other furry creatures. On occasions, and when food is in short supply, a box may hold the remains of smaller siblings that serve as emergency rations - yes Barn Owls have a cannibalistic streak. In other words, an owl box may not be the most sanitary of places to explore by the senses of hand or nose.
With fingers crossed that in the interim things went well for the owls, Bryan volunteered to climb the ladder, peer into the dark box and stretch a hand into the unknown. With luck the same hand might emerge unscathed, holding a Barn Owl or two. As soon as we put the ladder towards the box an adult Barn Owl flew out, immediately followed by another - a good sign that all was well with the family.
Bryan shouted down “Success, two chicks, but one unhatched egg”” as he gently placed each owl into bags and fetched them to ground level to be ringed. The chicks had well developed legs and feet of just the right dimensions for the “G” rings, GR26343 and GR26344. 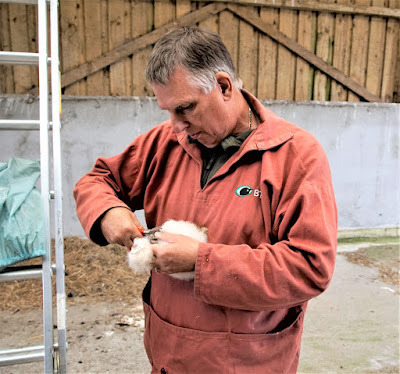 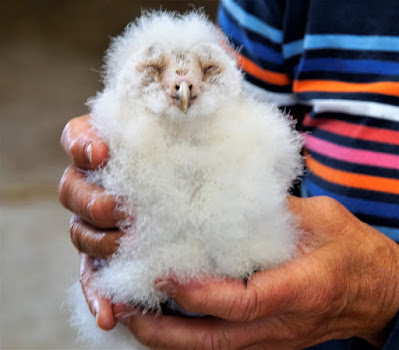 Barn Owl
There was time to clean the camera lens and for Steve to check the image on his phone. All was well, the picture bright and clear so that Steve and family can watch the progress of the owls from the comfort of their home screens. The young owls will leave the box for good in about 14 to 21 days’ time.
Linking this post to weekend blogs - Eileen's Blogspot and Anni in Texas.