Yesterday morning Alice and I had a ringing session in the reedbed and willow scrub at the Obs, and it was a bit of a Sylvia fest based on the number of Sylvia warbler species that we ringed. I had attempted to do some ringing Thursday morning, but as I was still awake when my alarm went off at 4:00 a.m., so basically having zero hours sleep, I decided not to bother. Anyway, back to yesterday. 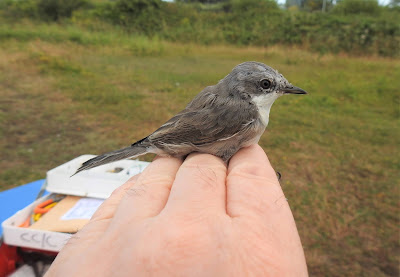 Lesser Whitethroat
Thankfully, the temperatures have now dropped, and we also have some cloud cover, so that improves things tremendously for ringing. At 5:00 a.m. yesterday, we had 4 oktas cloud cover, with a light north-easterly wind. Our net rides all run NW - SE, so a wind from the NE gives a little shelter.
As I have hinted at in my blog title, and above, we ringed a fair few Sylvia warblers yesterday. In fact, the Sylvia warbler total was 32 of three species. We ringed 54 birds as follows (recaptures in brackets):
Blackcap - 17
Reed Warbler - 4
Robin - 1
Greenfinch - 2
Lesser Whitethroat - 7
Blue Tit - 4
Willow Warbler - 1
Wren - 2
Whitethroat - 8
Great Tit - 2
Goldfinch - 1
Song Thrush - 1
Cetti's Warbler - (1) 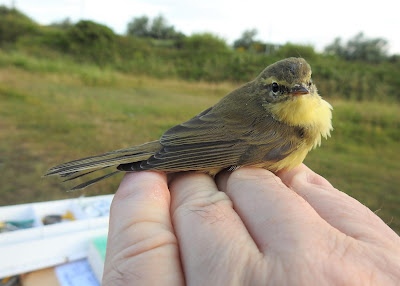 Willow Warbler
Other than what we ringed, I have very little to report as we were kept fairly busy processing birds. The Starlings were early again yesterday, and there were similar numbers to last time exiting the roost, perhaps somewhere in the region of 6,000. A Grasshopper Warbler was still singing from an area of grassland, and we had a vocal Cetti's Warbler as well. Other than a couple of Swifts over, that's about all I can wring from the pages of my notebook. 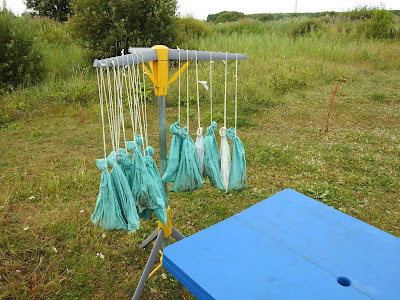 Bags of Sylvia warblers waitng to be processed
Fingers crossed that we might have some Spotted Flycatcher chicks to ring one evening this week, and hopefully I can have another session in the reedbed and scrub before weekend.