Late May/early June can be boom or bust for bird ringers and birders alike. In early 2021 unpredictability became the norm when unseasonal cold air, regular frosts and nagging northerlies played havoc with springtime migration from Africa to Europe. Late arrivals, non-arrivals and delays to the start of breeding put question marks over what we might see in our first ringing session of June at Oakenclough.
On Tuesday I met Andy at 0630 not knowing what to expect in the way of numbers of birds, let alone the species or their ages. It was a warm sunny morning, time for us and the birds to grab a touch of summer.
Although as expected we didn’t catch too many birds, just ten, we learned a thing or two from the few we did see.  Perhaps more importantly it was the species we didn’t catch that led to more questions.  For instance, although we saw and heard 8 or 10 Willow Warblers, we caught none, at a time of year when we might expect to catch both adult birds collecting food for nestlings and/or recently fledged juveniles. We were left with the conclusion that late arriving male Willow Warblers continue their territorial songs while their even later mates sit tight on eggs yet to hatch.
Birds caught - 2 Garden Warbler, 2 Robin, 1 Blackbird, 1 Chaffinch, 1 Coal Tit, ! Treecreeper, 1 Blackcap , 1 Goldcrest.
We derived satisfaction from our two Garden Warblers, a male and female both caught in the same net and both in prime breeding condition. The female with a whopping brood patch, the male a whopping cloacal protuberance (don’t ask). These were just two of the four or more Garden Warblers on site, three in loud and sustained song. At last, and after a gap of many years, we have proof that Garden Warblers are breeding on site again rather than simply spring and autumn migrants.
Full marks to site owners United Utilities for showing their commitment to conservation by spending money and revitalising this site in favour of birds.
The two Robins, the Blackbird, Treecreeper, Coal Tit and Goldcrest were all fresh juveniles that bred on site. The adult male Blackcap was also in breeding condition and almost certainly paired with a female that we did not see or catch. 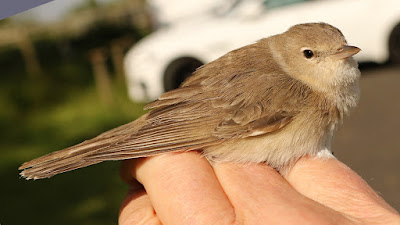 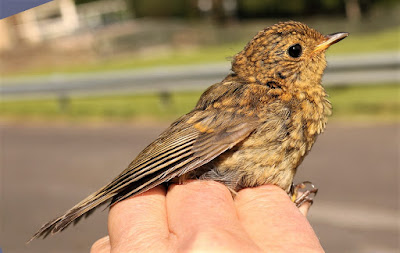 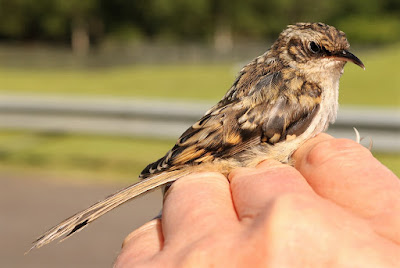 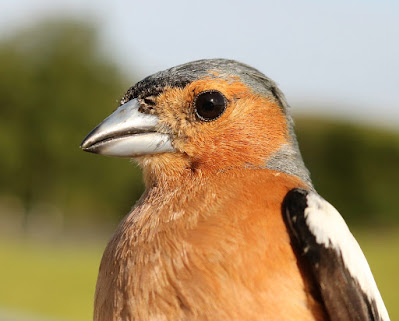 Chaffinch
Other than our ringing the morning produced little in the way of birds except for Pied Wagtails carrying food to their stone wall nest, young Mistle Thrushes, many dozens of Greylags and the occasional flyover Siskin. Siskins breed in the nearby conifer belt and rarely stray towards our nets until winter when our Niger seed feeders are on site.
Local anglers told us of Ospreys on more than one occasion during May, most likely the birds on their way to Scotland rather than taking their chances in the game keeper raptor free zone of nearby Bowland. But we live in hope of both Ospreys and Red Kites taking up residence in nearby hills and dales.
There's news of a Sand Martin in the next post of Another Bird Blog.