Saturday. The bright, sunny, and wind-free morning was perfect for a return to the Sand Martin colony at Cockerham where a motionless mist net would be hidden in the shade of the quarry face.
Andy and I had decided to return knowing that unlike the last visit, there would be youngsters this time.  At first we caught no young, just adults coming and going on their early morning forays.
Very soon along came “MUSEUM PARIS” with number 8998514, an adult female. The French ringed Sand Martin was a bonus, almost certainly ringed at Loire Atlantique where the River Lore meets the Atlantic Ocean, where ringers catch large numbers of migrating Sand Martins  on their journeys to and from Africa. 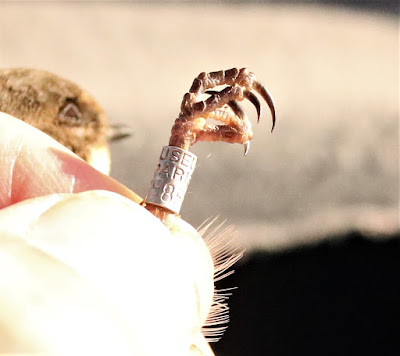 Sand Martin
An hour or so later we’d caught 31 Sand Martins - 24 new ones, 6 recaptures, and Paris 8998514. Included in the 24 new Sand Martins were 11 birds of the year (juveniles) the remainder all adults. All are now on the database and with luck we should receive details of the French ringed one from the French ringing scheme soon. 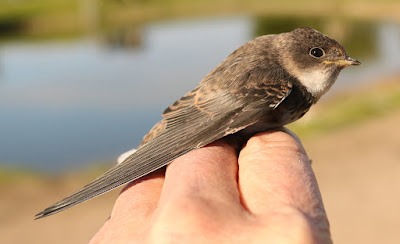 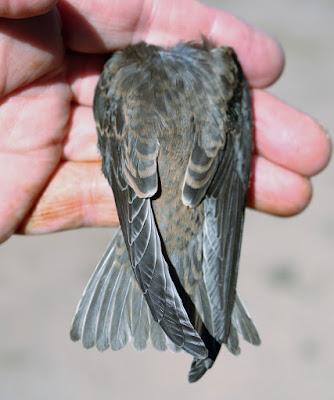 Sand Martin - juvenile
The martins kept us both fairly busy in taking them from our single 60 foot net and then processing each one by age, sex, breeding condition, wing and weight.
Wing lengths varied with the shortest juvenile wing length of 84mm and then up to 105, the tinier wing lengths an indication of their age. During database input three of the juveniles threw up a DemOn message as potential errors on wing length measurement. The measurements were correct  and provided a clue to the fact that the young martins were very recently fledged and yet to complete their growth to adulthood.
Meanwhile adult wings ranged from 103 to 111mm. The eleven juveniles weighed consistently heavier than the adults so it looks like the current fine weather is producing plenty of insect food. Juveniles - 12.3gms to 14.6gms adults from 11.8gms to 13.8gms.
There was little time for birding except to note two pairs of Oystercatcher and a single but vocal Whooper Swan, the latter a left over from winter. By rights the Whooper Swan should now be several hundred miles away in Iceland. 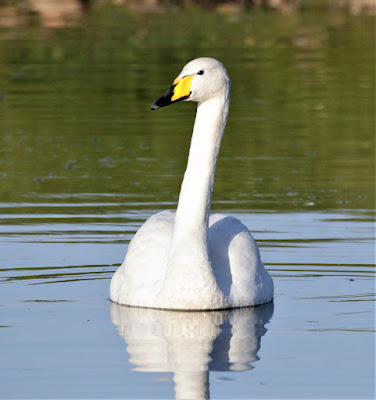 Whooper Swan
A pair of Little Ringed Plovers flew in briefly but left quickly when the resident pair of Oystercatchers started throwing their weight around. We think the plovers flew off in the direction of Conder Green where at least one has been present since April without any reports of breeding success. 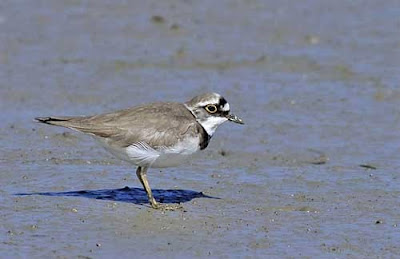 Little Ringed Plover
Back home in the garden there was a nest full of 5 Greenfinch chicks at an ideal age for ringing.
It’s good to report that around here at least Greenfinches are doing better than for a number of years. The songs and calls of Greenfinches are back on the soundtrack of garden birds and I do think we have a small colony of the species in local gardens and hedgerows.
“Trichomonosis is the name given to a disease caused by the protozoan parasite Trichomonas gallinae. It has been recorded in a number of garden bird species and is widely acknowledged to be the causal factor in the rapid decline of the British Greenfinch population first noted in late summer 2006.” 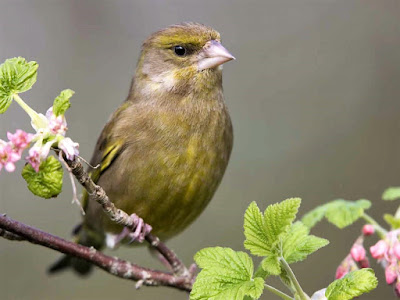 Greenfinch
Let’s hope that Greenfinches are making a real comeback. A cause for celebration.