There was a thin film of ice on the windscreen again this morning.  After the coldest, frostiest April for at least 60 years with an average of 13 days of air frosts, the temperatures are said to rise next week.
I was too early for the meet with Andy at the Sand Martin quarry so I spent the first hour birding at Conder Green in winter woollens. It was pretty quiet. Already the breeding birds appear to have settled into a routine.
As predicted, my count of 16 Avocets just a week ago on Thursday 22nd on was a flash in the pan of noisy, quarrelsome migrants. In their place today were just 3 pairs of Avocets tending their nests and interacting with partners. 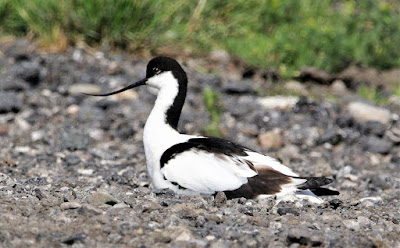 Avocet
Other waders produced similar counts to a week ago with a good number of Black-tailed Godwits, several Oystercatcher, and singles of Snipe, Curlew and Spotted Redshank. It’s a little late in the spring for a Snipe to be hereabouts when they should be thinking about breeding. 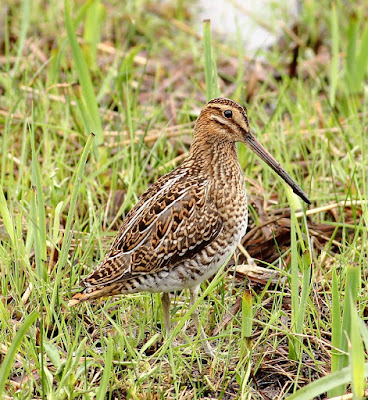 Snipe
I met Andy at 0830 and we drove down to the foot of the quarry and looked up at about 150 Sand Martins as they circled noisily around the concentration of nest holes.
Over the winter Chris the owner of the quarry constructed a ledge in the hope that we could reach the martins more easily. In this our first visit of the year it worked well and enabled us to catch 30 Sand Martins, 29 new ones and one recapture from 2020, AKE3973, an adult male we ringed last June. 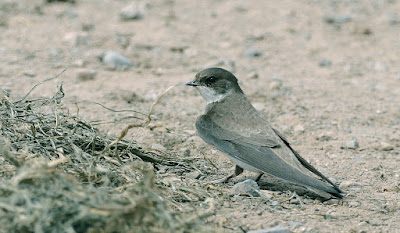 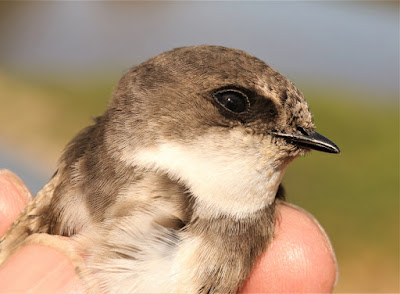 Sand Martin
We’ll stay away from the site now until late May/early June when the first brood of youngsters should be on the wing.
The fishing lake here holds few other birds apart from today a Grey Heron, a single Kestrel, 2 Goldfinch, 4 Oystercatchers and 8 Mute Swan. The water level is too high this year to host breeding Avocets and the water too cold to welcome anglers with just one hardy sole camped out today.
==========================================
If as promised the weather warms then a visit up to Oakenclough is on the cards for next week.
Just the other day details arrived of Lesser Redpoll AHK3073 caught at Oakenclough on 20 April 2021. This recapture turned out to be a very valuable one because AHK3073 had been ringed by other ringers (Sorby Breck Ringing Group) just 2 days earlier on 18 April 2021. 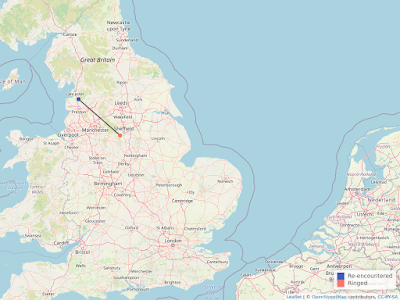 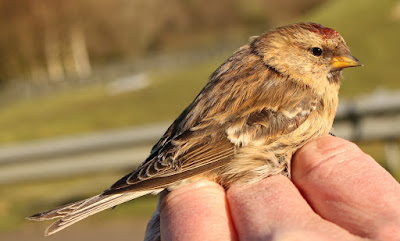 Lesser Redpoll
AHK3073 had travelled 99kms from just north of Sheffield in those two days. Here was a bird on a mission of heading north, probably on the way to the English Lakes or Scotland and where it would find a mate for the summer months.
Don't go away. Back soon.